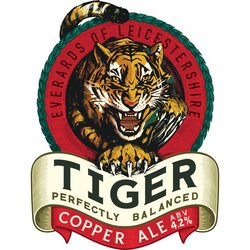 What better way to watch the Leicester Tigers than with a pint of Tiger in hand? Lucky for you, this beer is available throughout the ground. A local favourite from Everards, Tiger is a perfectly balanced copper ale, brewed with carefully selected British hops which gives it that moreish toffee character.

Did you know that the tiger is synonymous with Leicestershire after the Royal Leicestershire Regiment were nicknamed ‘The Tigers’ in 1825 following long service in India?  It’s also the reason behind the name of the Leicester Tigers team. We are proud to have Tiger as our Official Beer as it is for so many local teams and that’s why our Tiger is roaring!

Everards brew a diverse range of great tasting beers and they have over 150 pubs throughout the Midlands all run by independent business owners.  Our new brewery is now open at Everards Meadows, where you can eat, drink and experience our brewery. Love pubs and beer? For news, competitions and more, sign up to the Everards newsletter, visit everards.co.uk or follow them on Facebook, Instagram and Twitter.

Kevin Sinfield will join Steve Borthwick’s coaching team at Leicester Tigers as Defence Coach ahead of the 2021/22 season.

In a trophy-laden professional rugby league career spanning 18 years, Sinfield made more than 500 appearances for Leeds Rhinos and represented England and Great Britain on more than 40 occasions.

He was awarded an MBE in 2014 for services to rugby league.

In 2015, he joined Yorkshire Carnegie in the RFU Championship for a season before retiring from playing professionally at the conclusion of the campaign.

Sinfield was appointed Rugby Director of the Rugby Football League in 2016 and helped lead England to the 2017 Rugby League World Cup Final before returning to Rhinos as Director of Rugby the following year.

In the recent 2021 Queens Birthday Honours, the incoming Tigers assistant coach was awarded an OBE for services to rugby league and charitable fundraising.