Jump to Main ContentJump to Primary Navigation
leicestertigers.comMattioli Woods Welford RoadContact UsTopps Tiles
Ellis Genge scored a try in each half to set Leicester Tigers on the way to a vital 30-3 over Newcastle Falcons on Saturday afternoon.

Genge, the loosehead prop, scored the first of Tigers' four tries shortly before half-time of the Aviva Premiership clash at Welford Road.

It broke the shackles on the home side, who had dominated for long periods of the first-half without finding a way through.

Tigers made the most of a yellow card for David Wilson to score two further tries early in the second half. Veainu finished a slick backs move before Genge charged over from close-range for his fifth try of the season.

The bonus-point try came in the final 10 minutes but was well worth the wait. Ben Youngs went over for a trademark solo score from 40m out for one of the tries of the season.

The result, coupled with a 25-19 defeat for Bath Rugby at Worcester Warriors, moved Tigers four points clear of Bath in the race for the final Aviva Premiership semi-final spot.

Matt O’Connor, in his first home game since returning to Tigers as head coach, brought Mike Williams, George McGuigan and Jack Roberts into the starting XV. And he was forced into a rejig of the back-row when Luke Hamilton failed a late fitness test. Brendon O’Connor moved to No8 with Harry Thacker starting at flanker.

Harry Wells, the Lumbers Player of the Month, was named on the bench, where there was also a place for Sam Harrison on his return from injury. Vereniki Goneva, the former Tigers winger, made his first return to Welford Road since his move to Newcastle in the summer.

Tigers began brightly, helped by three penalties against the Falcons in the opening four minutes. After going for territory with the first two, Burns pointed to the posts and kicked the hosts into a 3-0 lead.

Maxime Mermoz climbed above Goneva to win a high ball for Mike Williams to attack. O’Connor and Thompstone exchanged passes on the right before the No8 lost control forward in a tackle.

Roberts’s tackle on Goneva halted the Falcons counterattack but referee Ian Tempest ruled the Tigers player knocked-on when Thacker picked up the loose ball with a free run to the line.

As Tigers dominated the opening 15 minutes, referee Ian Tempest spoke to Will Welch, the Falcons captain, after the visitors conceded six early penalties.

Despite dominating, Tigers were unable to find a way through the Falcons defence. And when O’Connor did find space on the left, play was brought back for a forward pass by JP Pietersen.

Newcastle weathered the storm, helped by some indiscipline from the Tigers, who conceded penalties at a lineout and a ruck to give Falcons their first attempt at goal after 25 minutes. Joel Hodgson, the fly-half, landed his kick to level the scores.

Tigers were frustrated in attack, where they appeared to be rushing things. Mike Williams knocked n as he tried to collect possession under pressure from Goneva before McGuigan was pinged for holding-on after a typically bullocking run.

Leicester were on the ball in defence, however, with Ben Youngs making a brilliant tackle as last man to stop Goneva finishing off a counterattack. Excellent Tigers defence protected the line and drove Newcastle back to the edge of the Leicester 22 where Mermoz knocked-on as he tried to steal possession back.

Tigers retook the lead five minutes before half-time when Burns landed his second penalty of the game after Falcons infringed at a ruck on their 22.

The penalty gave Tigers momentum for the final minutes of the half and they claimed a try with the last play. The pack won possession against the head at a scrum on the Falcons 22, O’Connor was stopped just short before Genge forced his way over from close range for a try confirmed by the television match official. It gave Tigers an 11-3 lead at the break.

There were no changes to either side at the break.

Tigers were the first to show at the start of the second period, Burns collected his own chip through before winning a penalty at the breakdown. Tigers then won a penalty at the first scrum of the half and at the resulting lineout as they set up camp in the Falcons 22.

Another two penalties followed as Tigers opted to scrum, resulting in a yellow card for David Wilson, the former England prop. Replacement Jon Welsh came on with Sinoti Sinoti going off.

Eventually the scrum was set and Tigers produced a lovely move to score off first phase. Mermoz was the pivot around which Youngs built the attack before Burns put Veainu away to score on the right. Burns converted to move Tigers 18-3 ahead.

Tom Youngs came on for McGuigan before the restart.

Youngs’s first involvement was to come close to finishing a sweeping counterattack. Burns picked up loose ball for Thompstone to attack space on the right. His offload found Youngs but the hooker was bundled into touch by Welch’s try-saving tackle.

It was all Tigers now and some lovely interplay by the Youngs brothers put Cole into space 10m from the line. When he was stopped Ben Youngs’s quick pass sent Genge over next to the posts for his second try of the game.

There was some afters involving Dom Barrow and Welch, which resulted in Newcastle restarting the game with a penalty. In the meantime, Burns converted to put Leicester 25-3 ahead with 23 minutes remaining to score the bonus-point fourth try.

Genge, Cole and Burns left to a standing ovation when they were replaced by Fraser Balmain, Greg Bateman and Owen Williams on the hour.

Tigers continued to have dominance at the scrum but they were unable to make the most of a series of scrums 5m from the Newcastle line. The position was lost after Mermoz knocked on as he charged onto the ball.

A moment of brilliance by Ben Youngs brought up the bonus-point score. The scrum-half was 40m from the Falcons line when he tapped a penalty and went. He caught Welch and Sam Egerton off guard before stepping inside Zach Kibirige to score one of the individual tries of the season and secure an important bonus-point win.
Advertisement 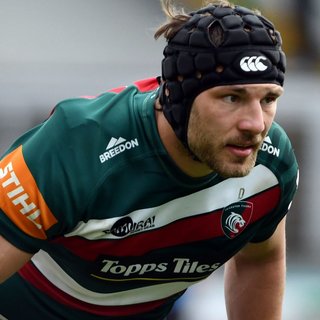 Former Tigers wing Vereniki Goneva makes his first return to Welford Road in a Falcons side led by Leicester legends Dean Richards and John Wells. Goneva, scorer of 41 tries in 89 games for Tigers before heading to the north-East last summer, has scored seven times this season.

Michael Young, who returned to the Falcons last season after spells with Leicester and Bath, starts at scrum-half for the Falcons and Tigers academy graduate Calum Green is in the second row. Both players this week announced the agreement of contract extensions at the Kingston Park club.

In Tigers team news announced at lunchtime on Friday, head coach Matt O’Connor includes Jack Roberts, Mike Williams and George McGuigan in the starting line-up as the only changes from the Round 19 meeting with Bath, while Sam Harrison is included in the squad after recovering from a knee injury. George McGuigan and Dom Barrow are ex-Falcons players and will face some former team-mates.

O’Connor is in charge for the first time since returning to Tigers.

He said: “We were disappointed with defeat against Bath after leading most of the way, but we’ve been looking at fixing a few things that were below-par in our performance and bringing the energy and tempo we need in the game.

“We had certainly one or two chances in the second half where we should have been better and if you execute any of those you put yourselves in a position to win the game.

“Taking a point was important, though, and now we dust ourselves off and make sure we put in a good performance at home this week.”

Tigers go into the game in fourth place in the table, ahead of Bath on points difference, with just three rounds remaining before the semi-final stages. Bath are at Worcester Warriors on Saturday afternoon.

As Tigers lost in dramatic style at Twickenham last weekend, Falcons grabbed a late win over Gloucester at Kingston Park and have now won as many league games in 19 rounds as they did in the whole of 2015/16.

The first meeting of the teams this season was in Round 3 in September when Tigers triumphed 14-13, but only after surviving a last-gasp drop-goal attempt from the Falcons. Last season’s encounter at Welford Road was played on Boxing Day and a 22-10 victory allowed Tigers to complete the calendar year unbeaten on home territory. Click here to re-live the details from that game.

The clubs have met on 55 previous occasions with 40 wins for Tigers and 12 by Newcastle/Gosforth and three draws.

Referee for Saturday is Ian Tempest, in charge of a Premiership fixture for the 31st time.

For a full matchday guide, including details of the Junior Tigers Club Takeover Day, click here.