Peter Betham, on his competitive debut, scored Tigers’ first try of the campaign, intercepting a pass on the Irish 10m line to score under the posts.

Tommy Bell, playing at fly-half in the absence of the injured Freddie Burns and Owen Williams, who was on the bench on his return, had a fine day with the boot. He kicked a conversion and seven penalties as Tigers recorded their third successive opening day victory and their seventh win in a row at Reading.

Academy scrum-half Ben White, 17, was an unused replacement in his first-ever inclusion in a matchday squad.

Tigers made a late change to their squad with Matt Smith replaced on the wing by George Catchpole, who stepped up from the bench. Paolo Odogwu came in for Catchpole among the replacements.

Tigers took a second-minute lead through Bell’s penalty after the hosts were pinged at a ruck.

They were tested for the first time in defence as Irish put together a series of phases. The Leicester line held up well and Sam Harrison’s tackle on Tom Fowlie forced the knock-on for Bell to clear.

The visitors were whistled at the first scrum but fly-half Chris Noakes pulled his kick across the posts to leave Tigers 3-0 ahead after nine minutes.

Noakes was at centre of the action again moments later, but this time his pass was picked off by Betham who raced home unopposed from 40m for his first score on his Leicester debut. Bell added a simple conversion to give Tigers a 10-0 lead.

Noakes put the Exiles first points on the board with a 40m penalty after Bateman was whistled at a ruck. Referee Matt Carley then awarded Tigers a scrum penalty and Bell made it three kicks from three to restore the visitors’ 10-point lead.

Tigers No8 Laurence Pearce collected the restart and was caught high by Topsy Ojo. Referee Carley consulted his television match official before showing the former England winger a yellow card.

However, Tigers were unable to make the man advantage count. They came under huge pressure at a 5m lineout, from which Jebb Sinclair was driven over to score for Irish. Noakes’s conversion left Tigers 13-10 ahead.

Tigers were awarded another scrum penalty as the Irish pack wheeled around on the Leicester put-in. Bell landed his kick to move Tigers 16-10 ahead after 26 minutes.

Bell was kicking beautifully out of hand too, his punt to the corner taking Tigers from the edge of their own 22 deep into the Irish 22.

With Ojo back on the field, Irish threatened the Leicester line after disrupting a Tigers lineout, but Lewington knocked-on in the tackle 10m out. It was one of a series of handling errors by the Exiles.

An excellent tackle by Tait on Fowlie then disrupted another Irish attack but the Tigers captain knocked on as he tried to secure the loose ball.

But Tigers were unable to exit their 22 and were almost made to pay when an Irish drive had Leicester under huge pressure underneath their posts. Sinclair rolled out of the maul and over the line but dropped the ball as he touched down. Referee Carley came back for an earlier infringement and Noakes’s penalty cut the lead to 16-13 90 seconds before the break.

Tigers steadied themselves and put together their best period of possession of the second quarter to have the hosts under pressure in their half. Tigers sent wave after wave of attack down on the Irish defence before Skivington went offside in the shadow of his posts. Bell landed the penalty with the last kick of the half to send Tigers in at the break 19-13 ahead.

The second-half was slow to get going with both sides kicking for territory. Irish had the first chance to put points on the board after Tigers infringed at a ruck, and Noakes cut their lead to 19-16 with his kick.

Bell was narrowly wide with a huge penalty from inside his own half after Irish went offside in midfield.

It then needed a try-saving tackle by Mike Williams who held up Eoin Griffin, after the Irish centre broke through in midfield from the back of a lineout.

Tigers, who introduced Riccardo Brugnara in place of Logovi’I Mulipola, held firm in the scrum and then forced the turnover in defence. They then won a penalty at the resulting scrum and Bell found touch on the 10m line.

It proved a pivotal moment in the co an decisive intervention, not least when Tigers won a penalty themselves after Irish came in at the side of a maul 10m from their line. Bell landed his kick to give Leicester a six-point cushion going into the final quarter.

A brilliant break by Harrison then took Tigers 50m into the Irish half. They were unable to make the most of an opportunity on the right as Tait’s pass went to floor but they maintained possession, switched play to the opposite flank where Croft broke a tackle, fed Catchpole, who somehow won the lineout as he was driven towards touch.

It gave Tigers the platform to go again, with replacements Opeti Fonua and Harry Thacker driving at the heart of the Irish defence. Fonua eventually barrelled his way over but the TMO ruled he lost possession as he grounded the ball.

Another excellent break, this time through broken field by Catchpole, took Tigers back into Irish territory. His long pass found Thacker on the right but he was bundled into touch 10m out.

Owen Williams, on his return from a knee injury, was introduced for Seremaia Bai with 15 minutes remaining.

Tigers had Irish under pressure at a 5m scrum. They worked the position to send McCaffrey bearing down on the hosts’ defence but he was pinged for holding on and Irish were able to clear the danger.

Irish were guilty of handling errors throughout the contest and a knock-on by their replacement back Shane Geraghty brought a promising attack to an end on the Tigers 22 as the clock ticked into the final 10 minutes.

A high tackle on Tait gave Bell a long-range penalty, and the fly-half made no mistake to move Leicester 25-16 ahead five minutes from time.

Tigers threatened a breakaway try in the dying moments when Mike Fitzgerald broke 40m to the Exiles 22. His pass was meant for Tait in support but was touched by an Irish hand and the chance went away.

Instead, good work by Croft, McCaffrey and Harrison was rewarded with a penalty and Bell knocked over his kick, with the help of the left-hand post, to set the seal on a 28-16 win.
Advertisement 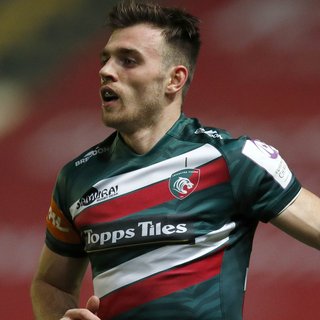