Leicester Tigers Development XV got the Premiership ‘A’ League season off to a successful start with nine tries in a 61-12 victory over Worcester Cavaliers at Sixways on Monday evening.

They had to do it the hard way too, coming from two scores down early on, but had a bonus point in the bag before half-time following a quickfire double from Jordan Olowofela, and scores from Harry Simmons and Harry Mahoney as they led 28-12.

And the scoreboard ticked over even more rapidly after the beak with Olowofela completing his hat-trick alongside a second for Mahoney and tries from Charlie Thacker, Joe Maksymiw and Jono Kitto. Fly-half Tom Hardwick kicked eight out of nine conversion attempts.

Summer signing Gareth Owen gained a first run-out for the club, with Valentino Mapapalangi and Jonah Holmes the other summer arrivals to push their claims after being handed starts at Sixways.

Former Bristol prop Kyle Traynor was given an opportunity in the front row after playing in pre-season fixtures and England Under-18 prop Joe Heyes was included among the replacements alongside Loughborough University quartet Callum Lynch, Toby Hutchinson, Matt Travers and Jon Hughes.

Tigers started with the majority of possession but were restricted to using it in the space between the 10-metre lines and it was Cavaliers who broke the deadlock with a try from a lineout drive on the right, No8 Tom Dodd making the final push for the line. Fly-half Sam Hollingsworth kicked the conversion from wide on the right.

They added a second just five minutes later with a blindside break on the left and scrum-half Sam Pointon had enough strength to charge over. Hollingsworth this time pushed the kick across the posts but Worcester had a 12-point cushion.

Will Evans thought he had cut into the deficit just moments later when Tigers capitalised on loose lineout work from the hosts. Hooker Mahoney took play up to the line, Tom Croft and Mapapalangi retained control and Evans reached for the line, only for the referee to blow for a penalty against the support.

Tigers were not to be denied, though, and Olowofela scored twice in seven minutes as Tigers took the lead for the first time.

First, the young full-back got on the end of a sweeping initiated by Owen’s to score on the right and his second was even more impressive, showing good footwork and pace to go through a gap after the scrum had provided a platform inside the Cavaliers 22.

Hardwick knocked over both conversions as Tigers led 14-12.

A third score came from some more good work from the backs, with Olowofela carrying up towards halfway and then Hardwick picking his way inside the defence. When the fly-half chipped the ball forward, Simmons showed electric pace to latch on to it and judged the bounce well to score.

Hardwick again added the extras and then provided a telling contribution for the bonus-point score moments later.

When he nudged the ball into the right-hand corner, Cavaliers full-back Nick David got a hand to the ball and gave away the throw-in, allowing Tigers to take control and hooker Mahoney steered the drive over the line. Hardwick added his fourth conversion as Tigers suddenly led by more than two scores at 28-12.

A fifth try came just three minutes into the second half, with the forward rolling forward on the left and Evans making the final thrust for the line.

And Olowofela collected his hat-trick score with a solo run from near halfway two minutes later, with Hardwick landing his fifth successful conversion as the lead reached 40-12.

Number six came just after the 50-miniute mark, with Mahoney involved on the left and, when Tigers recycled, Hardwick found support from Thacker who beat the first tackle and ran in. Hardwick again added the extras.

There was more to come, too, with Hardwick continuing to pick his passes and replacement prop Heyes making a 30-metre break before Maksymiw was given a run to the line on the right. Hardwick added the conversion from the touchline.

Jono Kitto’s first involvement was putting the ball into a scrum near halfway on the hour mark and when he collected the ball at the base, he broke to the right and raced away, staying clear to the tryline in the corner. Hardwick thumped the kick over to take the score to 61-12 in the Tigers’ favour.

Cavaliers found themselves down to 14 men when wing Tom Howe was sin-binned for a deliberate knock-on as Mahoney made a break on the left but they stood firm as Tigers punted the penalty into the left corner.

Tigers continued to pin the hosts in their own half as coach Brett Deacon emptied the bench in the final 20 minutes.

The next fixture in the ‘A’ league programme is away to Northampton Saints on Saturday. Kick-off is at 7.00pm, following the Aviva Premiership fixture between the two teams at Franklin’s Gardens.

MARCHING IN TO SAINTS IN STYLE

That's it from Worcester for tonight as our Tigers Development XV get the new A League season underway in style ahead of next Saturday's clash with Northampton Saints at Franklin's Gardens.

Note: Our A League fixture kick's off at 7.00pm, following the Premiership Rugby clash at 4.30pm - see you there!

SIXTY-ONE POINTS FOR TIGERS AT SIXWAYS

That’s FULL TIME at Sixways Stadium and we’ve come away with an entertaining, come from behind win to start the new A League season.

Nine tries and just one missed conversion from Tom Hardwick sees us record a 61-12 victory over Worcester.

No points since the 58th minute … after scoring our first in the 17th. Rugby does entertain on so many levels.

Our lead remains 61-12 at Sixways over the Worcester Cavaliers.

Replacement made by coach Brett Deacon as Harry Simmons gets an early shower with Matt Travers coming on to the field at fullback.

Success from the boot for Tom Hardwick again and we now lead 61-12 over Worcester as the hour mark approaches here at Sixways.

After just a minute on the field, Jonno Kitto scores as easy a try as you'll ever see - racing 40 from the base of a scrum down the blindside to add another for Tigers.

Tom Hardwick nails it from just a few yards in from touch and our lead extends to 54-12 over Worcester.

As we await the conversion, Jordan Olowofela is given a well earned rest and replaced by Jonno Kitto.

Harry Simmons will shift from scrumhalf to fullback.

After trailing by 12 after twenty minutes, we now lead by 40 here at Sixways with twenty-five left on the clock.

Conversion successful from Tom Hardwick yet again and the lead is now 47-12.

This young man certainly knows how to hit them from the tee.

Another strong march up field from the big men in this Tigers side sees space out wide created for a flying Charlie Thacker to cross after being gifted a beautiful ball to run on to in space.

Another replacement for our lads as Gareth Owen is given an early shower, replaced by Jon Hughes.

Conversion successful for Tom Hardwick and our lead is now 40-12 over Worcester here at Sixways.

A hop, a skip and a jump … and Jordan Olowofela is through to race away and cross for his hat-trick.

Conversion unsuccessful and our lead is 33-12 over Worcester Cavaliers.

Two minutes in to the second chapter here at Sixways and another strong showing up front with a Tigers maul proves too powerful for Worcester and Harry Mahoney has a second from the back of the pack.

Three changes made at Half Time with Fred Tuilagi, Joe Heyes and Owen Hills on for Tom Croft, Ben Betts and Kyle Traynor.

That’s HALF TIME at Sixways in our opening A League fixture of the new season and we lead Worcester 28-12. #tigersfamily

Conversion splits the uprights in two once again from Tom Hardwick and we now lead Worcester 28-12 at Sixways.

An error at the back from the home side hands us a 5m line out and a perfectly executed maul from the Development XV, in true Tigers style, sees Harry Mahoney cross.

Conversion successful for Tom Hardwick and our lead is now 21-12 over Worcester as the half hour mark approaches.

Scrumhalf Harry Simmons crosses for our third after swooping on a perfectly placed chip from Tom Hardwick following a beautiful break down the left flanker from the flyhalf.

Conversion successful from in front of the uprights for Tom Hardwick and we take the lead 14-12 at Sixways.

Jordan Olowofela crosses for his - and our - second of the evening after slicing through a gap as the ball was shifted wide, quickly from a scrum to level the scores.

Conversion successful from Tom Hardwick and we now trail the Cavaliers by five points, 7-12 after 18 minutes.

Jordan Olowofela crosses in the corner after a perfect show of quick hands out the back line sees the fullback in space.

The first scoring chance for our lads is denied as Will Evans is ruled to have made a ‘double movement’ in the attempt.

Conversion attempt waved away and Worcester’s lead remains at 12-0 here at Sixways after as many minutes.

The home side produce a sneaky play down the blind side from a ruck and a ball inside sees them over.

Successful attempt at goal from the home side and they lead 7-0 here at Sixways.

Opening points of the game go the home side’s way after a strong driving maul followed a line out 5 out from our line. 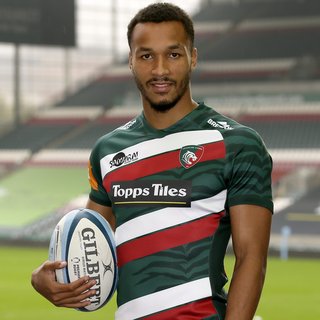 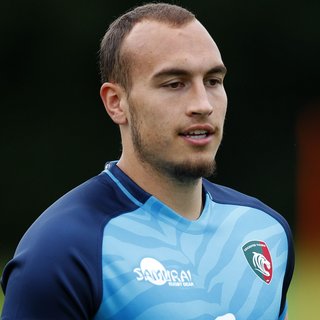 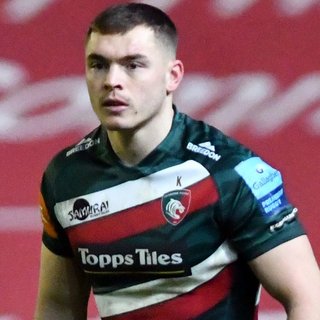 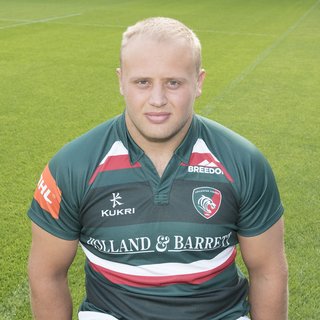 Summer signings Gareth Owen and Valentino Mapapalangi are included in the Leicester Tigers Development XV team for the opening fixture in this season’s Premiership ‘A’ League at Worcester this evening.

Former Scarlets centre Owen makes his first appearance in a Tigers shirt, while Tonga international flanker Mapapalangi has a run-out after playing in the pre-season win over the Ospreys at Welford Road.

Mapapalangi joins captain Tom Croft and Will Evans in the back row.

Another summer arrival, Jonah Holmes, starts on the wing after gaining gametime during the pre-season period.

Former Bristol prop Kyle Traynor is given another opportunity in the front row after playing in pre-season fixtures and England Under-18 prop Joe Heyes is named among the replacements where he is joined by Loughborough University quartet Callum Lynch, Toby Hutchinson, Matt Travers and Jon Hughes.

Kick-off at Sixways is at 7.30pm. Admission is £5. Keep in touch with the action on the Tigers website and social media channels.