Glasgow ran in five tries in front of a sold-out Scotstoun Stadium to inflict a punishing defeat on the Tigers.

Adam Thompstone finished off a lineout drive to give Tigers an early 10-3 lead. But they were undone by three tries in eight first-half minutes for Leonardo Sarto, Fraser Brown and Henry Pyrgos and there was to be no way back.

Mark Bennet scored an intercept try for the bonus-point score in the second-half and Heineken Man-of-the-Match Sarto scored his second late in the game.

Tigers gave a debut to Australia international Matt Toomua, who started at centre alongside Mathew Tait. Ellis Genge made his first Champions Cup appearance, and Tom Brady started his first game in Europe for the Tigers.

Glasgow were forced into a change after the warm-up with Bennet coming in for Alex Dunbar at centre. Nick Grigg stepped up on to the bench. Prop Gordon Reid, meanwhile, made his 100th appearance for the club.

Tigers kicked into a stiff breeze in the first half, and they struggled to exit their own territory in the opening stages with Finn Russell’s accurate boot pinning them back.

But it was through the boot of Ben Youngs that they looked to exit, and when Stuart Hogg knocked on under pressure Tigers won a penalty for accidental offside. Tigers then won another penalty for offside on the Glasgow 22 and Williams booted them into a 3-0 lead.

Telusa Veainu was the coolest man in Scotstoun as he waited for Russell’s grubber to cross his line before dotting down just in front of Sarto.

Toomua was sent to the sin bin in the 13th minute for a late tackle on Russell that took the Glasgow fly-half above the horizontal. The home fans were baying for red but French referee Mathieu Raynal consulted his TMO before issuing a yellow card. Russell went for goal from halfway to bring the home side level.

A lovely kick by Ben Youngs, spotting that no-one was at home on turnover ball, allowed Adam Thompstone to pin Hogg on his 22 and win the holding-on penalty. Tigers went for territory and had Graham Kitchener dragged down at the lineout. Ben Youngs tapped and went and won another penalty as Ryan Wilson failed to retreat, for which he was shown a yellow card.

Williams went to the corner, Mike Fitzgerald set up the drive, which took Tigers infield towards the posts, where Thompstone applied the finish. It was the winger’s second try of the campaign and was converted by Williams for a 10-3 lead.

However, Glasgow hit back quickly. The hosts kept it tight, testing Tigers around the fringes and eventually Sarto found a gap to dart over from 10m. Russell converted to bring Glasgow level again.

Toomua returned to the pitch for the restart.

Glasgow took the lead for the first time in the 28th minute. Tigers failed to deal with Fraser Brown’s aggressive running and the hooker rode a tackle to score next to the posts. Russell’s conversion moved Glasgow 17-10 ahead before Wilson returned to the field.

The hosts scored their third try to stretch their lead. This time scrum-half Pyrgos’s dummy created the gap and he dived over from close range.

No8 Josh Strauss went off his feet and Williams landed his kick to cut the deficit to 22-13. Hogg was short and wide with a 55m penalty with the last kick of the half.

Tigers had all the possession in the first 10 minutes of the second half but could find no way through the Glasgow defence. It was typified by Bennet’s closing down of Veainu that forced the Tonga international into a forward pass.

Betham replaced Brady in the 48th minute, as Tigers looked for a way to break down their hosts.

There were flashpoints all over the pitch, and tempers flared again as Tigers felt they were prevented from taking a quick lineout.

It swung the momentum fully Glasgow's way and, with their tails up, a brilliant 60m run by Sarto almost created a fourth try. He stepped off the right wing and found supporting runners to put Rory Hughes away on the left, but he was held up in the corner by desperate Tigers defence.

Tigers were pinged twice at the resulting scrum, and Logovi’i Mulipola, who had only just replaced Genge, was shown a yellow card. Genge returned to the field to complete the scrum in place of Thompstone.

Glasgow secured their ball and went down the narrow channel where prop Reid was unable to gather with the line in sight.

Tigers somehow overturned possession at a 5m lineout and Tait booted deep into Glasgow territory. However, Hughes got back to retrieve the ball and then evaded Betham to secure possession.

Back Glasgow came as they continued to dominate. And when Tigers infringed at a lineout drive, they were issued with a team warning. Russell opted for the posts and extended the lead to 28-13.

Tigers won possession at the restart and had Glasgow under pressure on their own 22. However, Tait tried to force the issue and his pass was intercepted by Bennet, who raced 60m to score the bonus-point try. Russell’s conversion put Glasgow 35-13 ahead going into the final 10 minutes.

Tigers rang the changes with Freddie Burns, Sam Harrison and Will Evans replacing Toomua, Ben Youngs and O’Connor. Williams moved to centre and Burns slotted in at fly-half.

Another interception, this time Sarto reading Burns’s pass, resulted in a second breakaway try for Glasgow. Sarto finished behind the posts for his second try. Russell converted for the last points of the game.
Advertisement 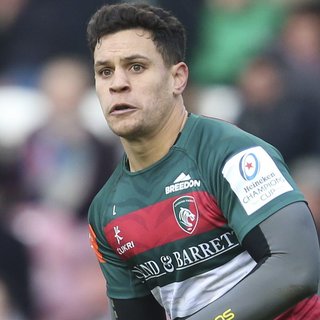