Thompstone finished off Freddie Burns’s superb piece of awareness for his fifth try of the season. Fly-half Burns converted the try and kicked three other penalties in front of another huge crowd at Welford Road on Saturday evening.

Saints scored a try of their own through Mikey Haywood and Stephen Myler landed two penalties to keep Saints in touch for much of the match.

But Burns’s third penalty with nine minutes remaining and a last-minute kick from Owen Williams sealed the win, Tigers’ fifth in a row, and ensured Northampton returned home empty-handed.

Logovi'i Mulipola and JP Pietersen returned from international duty to take their place in the Tigers line-up. Tigers were forced into a late change in the front row after Tom Youngs was withdrawn to a back spasm. Harry Thacker started at hooker with George McGuigan coming on to the bench. Ed Slater took over as captain.

Jono Kitto started at scrum-half in the only change to the backline from last weekend’s win at Bristol. George Worth made his first start at home in the Aviva Premiership while Manu Tuilagi was named on the bench for his first appearance in a home match squad this season.

It was a typical highly-charged atmosphere for derby day and Northampton went down to 14 men within two minutes of kick-off. Luther Burrell, their England centre, was shown a yellow card for a high tackle on George Worth.

Worth brushed himself down and at the next attack turned the Saints defence with a grubber into their 22, and Myler skewed his return kick into touch.

Slater was played in the lineout and Burns landed the penalty to give Tigers a 3-0 lead after seven minutes.

And they made their extra man count with a try right at the end of the sin-bin period, and it owed much to the vision of Burns. He spotted Saints were short-handed on the Tigers right and doubled-back across the ruck, took the pass from Kitto and found Thompstone in acres of space to score on the right. Burns converted to give Tigers a 10-0 lead after 15 minutes.

Thompstone’s next involvement saw him sent to the bin for a dangerour tackle on George North. Thompstone was deceived by the bounce of the ball and collided with North as he jumped for the ball. Thompstone was yellow-carded and North went off for a HIA.

Saints had Tigers under pressure for the firsty time at the penalty lineout. Tigers appeared to have halted the drive just short but Mikey Haywood reached out from a pile of bodies to score. Myler missed the conversion as Tigers led 10-5 midway through the half.

Myler was more accurate out of hand, though, and his penalty kick took the visitors abck to within 5m of the Leicester line. But Tigers sacked the drive and won the turnover as the ball failed to appear.

Kitchener was then ruled to have knocked the ball out of Tom Kessell’s hands at a ruck and Myler landed the penalty from distance to cut Leicester’s lead to two points.

Ed Slater charged down Kessell’s clearance at the restart, gathered the loose ball and sensing Mike Fitzferald on his outside passed the ball through his legs but just out of reach of his run.

Tigers ended the half on the defensive as Myler pumped a penalty up to their 10m line. James Craig latched onto Kessell’s break and then kicked ahead but Kitto had back-tracked and mopped up the loose ball.

Saints won a scrum penalty in front of the posts for Myler to cut Leicester’s lead to 13-11 with the last kick of the first half.

Tigers looked to start the second half positively, Thacker and Betham kicking Saints back into their own 22 and forcing them to attack from deep.

But they were unable to get a firm footing and a series of penalties eased the pressure on the Saints allowed them to find field position.

At one penalty, turned down a kick at posts to tap and go to take Saints into the Leicester 22. But Tigers defended well, Hamilton and O’Connor combined to steel possession and Kitto found touch.

Thacker then made a brilliant turnover to steal the ball from North as he presented for his arriving scrum-half.

Tigers freshened the team up with the introduction of George McGuigan, Ellis Genge, Sam Harrison and Manu Tuilagi for Thacker, Mulipola, Kitto and Betham.

Tigers turned up the tempo at the breakdown and attacked the fringes, with Genge and McGuigan immediately to the fore. The tactic had Saints under huge pressure and took Tigers over the line but Fitzgerald was held up.

Saints were under huge pressure at the 5m scrum, but conceded a penalty as the set-piece crumbled. But Tigers were pinged at the reset and Myler cleared.

Back Tigers came. Burns’s angled a clever chip for Brady to chase into the left corner where Jamie Elliott was forced to concede the lineout. But again Tigers were unable to control the ball and Gibson overturned possession for Myler to clear.

It was all Tigers now but they unable to make the pressure count. Burns went through a gap on the 22 and found Harrison, who was stopped by last-man Foden.

A 5m scrum gave Tigers another attacking platform. Again they kept it close, but again they were unable to find a way through before Kitchener was help up over the line.

Tigers won a penalty at the resulting scrum and Burns ensured they took some points from their prolonged stay in the Saints 22 by landing the kick with the aid of an upright. The first points of the second half, it gave Tigers a 16-11 lead with 11 minutes remaining.

It was Burns’s last contribution before he was replaced by JP Pietersen. Pietersen slotted in at centre with Williams moving to fly-half.

Tigers had to dig deep to preserve their advantage with three minutes remaining. Lock Michael Paterson took the Saints to within sight of the Leicester line and replacement Api Ratuniyarawa thought he had foubnd a way through. However, Hamilton made the tackle and Slater latched on to win the penalty.

It was a telling intervention by the Leicester forwards. Kitchener was pulled down at a lineout with less than a minute remaining and Williams banged over the penalty to seal the victory and ensure Northampton returned home without a match point. 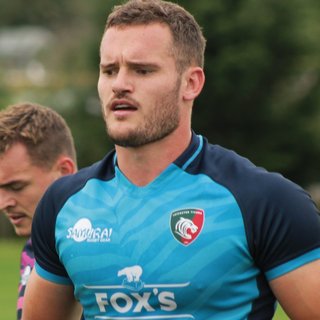 Dating back to a first encounter in 1880, the first year of Tigers’ existence, East Midlands derby days continue to produce memorable moments and there is the promise of another massive encounter at the home of the Tigers this weekend in Round 10 of the Aviva Premiership season.

Tigers won home and away last year by a combined margin of nine points, with the game at Welford Road settled by a last-minute penalty from Freddie Burns. Check out the details of that enthralling afternoon by clicking here.

The home side go into Saturday’s match on the back of four successive wins in all competitions, while Saints had won four on the bounce before a last-gasp defeat at home to Newcastle Falcons last weekend.

Tigers recall prop Logovi’i Mulipola and JP Pietersen after international duty, though Telusa Veainu has been stood down after suffering a concussion playing for Tonga during the autumn. Manu Tuilagi is in the second game of his comeback from injury and starts among the replacements. Dan Cole and Ben Youngs are with England for their final Test of the year.

Saints welcome back George North and the Pisi brothers in time for Saturday, thohgh they have four players in the England squad to face Australia at Twickenham. Their line-up  includes former Tigers flanker Jamie Gibson and academy graduate Charlie Clare among the replacements.

Tigers director of rugby Richard Cockerill is a veteran of East Midlands derbies as player and coach, and says local rivalry is one of the great attractions in English club rugby.

“I think the tribalism of British sport is what makes it unique,” he said. “We are not franchises or regions, we are clubs and teams and represent where we live which I think is very important.

“To me, this is probably the truest rivalry in British rugby. We’re very close to each other, two very good sides and not many games go past without incident.

“You have to play with the passion and emotion the occasion demands and it’s a big day for
the players and supporters. We know that form and who gets picked is pretty irrelevant, it all comes down to playing on the day.”

Referee on Sunday is JP Doyle.

Welford Road will welcome another big crowd this weekend but tickets are still available and on general sale. Book in person at Welford Road or phone 0116 319 8888 (option 2). The office is open 9am-5pm Monday-Saturday and from 9am on matchday. Or click here to book online any time.

For a full matchday guide to what’s in store, click here.

Supporters are advised to allow plenty of time for their journey during the Christmas shopping period. Car parks are likely to be busy in the city centre but there are public transport options, including Centrebus matchday services on four routes from Market Bosworth, Market Harborough, Melton Mowbray and Oakham. Click here for more details.