Leicester Tigers continued their unbeaten start to the season with a 16-14 victory over Harlequins at Mattioli Woods Welford Road on Sunday afternoon in Gallagher Premiership Round 10.

Respective fly-halves George Ford and Marcus Smith provided the only points of the first half as Tigers led 9-6 at the break, though Smith was also yellow-carded shortly before the break.

Both teams began the second half a man short as Jasper Wiese had joined Smith in the sin bin and it was Harry Potter who provided the breakthrough score for Tigers before Louis Lynagh scored in reply with the teams separated by just two points entering the last quarter-hour.

It stayed that way as Tigers remained top of the table ahead of the break for the Heineken Champions Cup period.

Both teams welcomed back their players from the autumn international period, with Steve Borthwick including Argentina skipper Julián Montoya alongside club captain Ellis Genge in the front row and new England cap Nic Dolly among the replacements. Dan Cole ran out for his 200th Premiership appearance.

Tigers kicked off and had some early ball, but first penalty went to Quins at scrum time on halfway. They thought they had scored too when Alex Dombrandt ran off the back of their lineout ball, but the ball had hit referee Ian Tempest on the way and he brought play back for a second penalty in the corner. This time the home crowd cheered a stolen lineout and Tigers were able to play out.

The next penalty went in favour of Tigers as Hanro Liebenberg got over a breakdown in front of the dugouts and, when Tigers threw to the tail of the lineout, Nemani Nadolo set up positon and Quins were penalised, allowing Ford to kick the opening points on 10 minutes.

Smith replied with his first penalty on 12 minutes when Tigers were blown at a lineout.

Ben Youngs almost provided a breakthrough with a break on the left, which included a big hand-off on Smith 10 metres out. But, when Tigers recycled, Ford was just unable to find Liebenberg with a crossfield kick to the left corner.

Cole was penalised in the back of a ruck on 17 minutes and Smith had no hesitation in calling for the kicking tee, 35 metres from goal and wide on the left. His kick gave the visitors the lead at 6-3.

A snipe from Youngs around a scrum on the left touchline took him clear but, when he chipped ahead, Tyrone Green scrambled back to div on the loose ball in front of his own line.

Tigers then turned down a kick at goal to go to the corner and, when the maul was brought down just two metres out, referee Tempest blew again and this time had a word with Quins captain Stephan Lewies before played restarted.

Tigers almost got to the liner again under the posts but played out to right where Freddie Steward dived into the corner under pressure from two defenders. Referee Tempest ruled against the score with no grounding.

Ford soon levelled the scores at 6-6 with his second penalty.

Dan Kelly’s big carry through the middle looked promising and when Youngs tried to play quickly from the breakdown, Smith was guilty of slapping ball out of his hands and departed with a yellow card. Ford kicked the penalty to make it 9-6 just five minutes short of half-time.

Numerical advantage did not last long though, with Wiese sin-binned after a tackle near halfway.

Tigers were penalised twice in defending the lineout, with the referee issuing a warning before Tigers held up centre Huw Jones over the tryline next to the posts to huge cheers from the home crowd.

The second half began with both teams still down to 14 men and it was Ford and Youngs who combined to create space wide on the left for the try from Potter.

The wing chased a clever kick from the left touchline from Youngs and dived in next to the posts, with Ford adding the extras for a 16-6 lead.

A knock-on in midfield, though, had Tigers scrambling back and Steward had to field loose ball almost on his own line. Quins enjoyed some dangerous possession from the resulting clearance but Wiese and Genge combined to drive them backwards and then Nadolo stepped in to force an error.

The teams had to cope with rain as well as cold as the game progressed, and it was Smith who added the next points with a penalty on 56 minutes

Tigers threatened with a series of phases through the forwards but when they then lost ball, Quins broke out with Green. He was eventually out-numbered inside the Tigers 22, but still played ball or Smith but Dombrandt could not hold on to his chip-kick on their left touchline.

A scrappy set-piece provided awkward ball for replacement scrum-half Richard Wigglesworth , but Quins were penalised as Danny Care played ball on the floor.

The visitors, though, still held field position and eventually found a score for Lynagh on the right.

It was Smith’s quick hands at fly-half that got ball to the wing and he chipped ahead down the touchline and won the foot-race to the corner. Smith was off-target with the conversion with the score at 16-14.

Ollie Chessum, on in the back row, raced on to loose ball after a drop from Lynagh, but Tigers then spilled possession inside the Quins 22.

Another high kick tested full-back Green and although he claimed ball, Quins were penalised as Tigers hit the breakdown and Ford called for the tee. He struck the kick firmly but was just wide of the posts.

Ford quickly pinned Quins back with a kick to the corner and Wigglesworth repeated the same as the game became even more frantic entering the closing moments.

A scrum penalty inside their own half with the close down to three minutes remaining gave Quins fresh hope but when they spread play to the right, Kelly swooped at the breakdown for a turnover and a penalty with 90 seconds left.

Another whistle followed at the lineout as the crowd gave their backing to the home team and Ford pumped play into the corner.

Lineout ball was lost, though, and a penalty award followed but Quins then fumbled ball at their lineout on halfway and Tigers had the points safely in the bag.

Tigers win 16-14 in front of a sell-out 24,202 crowd at Mattioli Woods Welford Road. Thank you for your support.

Ford just off-target with a 40-metre penalty out wide on the left. Still 16-14 in front.

Louis Lynagh shows his pace to score in the right-hand corner for Quins. Smith is off-target with the conversion as Tigers lead 16-14.

Smith narrows the gap with third penalty for Quins.

Ford adds the conversion of a try from Harry Potter for a 16-6 lead as both sin-binned players return to the field.

Harry Potter is in to score. Superb break and kick ahead from Ben Youngs, then the wing chases on to score.

CLOSE ONE AT HALF-TIME

Jasper Wiese departs to yellow card so both sides are a man short.

George Ford quickly adds the penalty from in front of the posts to put Tigers 9-6 in front.

Marcus Smith slaps ball out of the hands of Ben Youngs and is sent to sin bin.

George Ford thumps a 30-metre penalty through the posts to level the scores at 6-6.

Crowd shouting HEAVE as the Tigers forwards maul towards the line. Quins penalised and warned.

Smith lands a 35-metre kick from the tee to give Quins the advantage at 6-3.

Marcus Smith levels the scores at 3-3 with a penalty on the left.

It’s George Ford to get the game started here with Tigers kicking right to left as we look at it from the dugouts if that helps you.

We are almost up to kick-off as the crowd shows its appreciation to Tigers Family heroes Kevin Sinfield, Will Findlay, Welford and the Tigers Wheelchair Rugby Team who have performed notable feats in recent weeks.

Big-match kick-off is at 3.00pm. Follow all the action here with Matchday Live.

Both teams welcome back players from the autumn Tests as Leicester Tigers host Harlequins at a sell-out Matttioli Woods Welford Road today.

Club captain Ellis Genge and Argentina skipper Julián Montoya return to the Tigers front row, with Japer Wiese at No8 after playing in all three Tests for South Africa in the autumn.

Referee is Ian Tempest who approaching a century of gams in Premiership rugby.

We’re LIVE from Leicester Tigers versus Harlequins at Mattioli Woods Welford Road today in Round 10 of the Gallagher Premiership season. Kick-off is at 3.00pm. 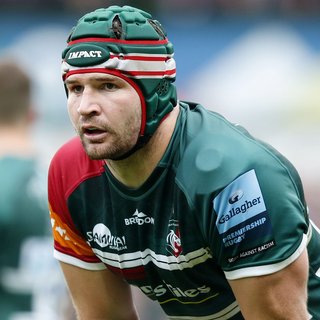 Steve Borthwick has named the Leicester Tigers matchday squad for the Gallagher Premiership Round 10 fixture against Harlequins.

Genge and Montoya are among eight Tigers returning to club action after the autumn series of international fixtures.

Nic Dolly, who made his Test debut in England’s win over South Africa at Twickenham a fortnight ago, Nephi Leatigaga and Joe Heyes are included as front-row replacements.

Harry Wells and Eli Snyman are the starting locks, with Jasper Wiese named at No8 after featuring in each of South Africa’s three-Test tour.

Wiese is joined by countrymen Marco van Staden and Hanro Liebenberg in the Tigers starting back row, with Ollie Chessum and Tommy Reffell named on the bench.

"After such a long period of not being able to share match days with our supporters, we have enjoyed seeing them coming back in big numbers so far this season and Sunday’s sell-out fixture is sure to be a special atmosphere"

Ben Youngs and George Ford are the starting half-backs, with Dan Kelly and Matías Moroni as the Tigers midfield pairing.

Nemani Nadolo and Harry Potter are the starting wings and Freddie Steward is at full-back.

Richard Wigglesworth is named as the replacement scrum-half, joining Bryce Hegarty and Guy Porter as the backs cover on the Leicester bench.

Speaking about Sunday’s fixture, Borthwick said: "It is an exciting week for everyone at Leicester Tigers. We have our whole squad back together, after the autumn internationals, and we have a sell out crowd at Mattioli Woods Welford Road for a game against the Premiership champions.

"After such a long period of not being able to share match days with our supporters, we have enjoyed seeing them coming back in big numbers so far this season and Sunday’s sell out fixture is sure to be a special atmosphere."