Leicester Tigers scored seven tries in a bonus-point 47-28 victory over London Irish in the Gallagher Premiership at Mattioli Woods Welford Road on Saturday.

The try bonus point was secured in the opening half, with a fourth score coming courtesy of a penalty try as the Irish tried illegally to stop a drive from the forwards, and Tigers added three more tries after the break to secure the five league points.

The Exiles, Premiership Rugby’s top tryscorers, added to their total in the opening minutes but Tigers responded with four tries before half-time, the latter two coming after Curtis Rona had been red-carded for a high tackle, to lead 26-16 at the break.

After Tommy Reffell added the fifth try, Nemani Nadolo claimed his second of the day and then Chris Ashton added his 90th Premiership score and first for top-of-the-table Tigers against an Irish side beaten just once previously in 2022.

Hanro Liebenberg led out a Tigers team short of five players with England, though Joe Heyes returned from the national team camp to start in the front row and there was a return to the starting line-up for Harry Wells and Jasper Wiese.

Freddie Burns led the Tigers on to the pitch in his 200th Premiership appearance, but it was the visitors who quickly got on the scoreboard with a try from Benhard van Rensberg, latching on to strong work near the tryline and an offload from Agustin Creevy to push over near the posts. Jackson added the conversion of their 70th Premiership try of the season for a 7-0 lead just three minutes in.

An early run by Nemani Nadolo into the Irish defensive line brought a penalty and when Tigers played from the set-piece on the left, he was there again to burst through and dive in under the posts. Burns levelled the scores with the conversion.

Irish sense another opportunity soon afterwards as Curtis Rona played to the right but Ollie Hassell-Collins over-ran the ball slightly and knocked forward.

A quick lineout down the right gave Julian Montoya a chance to build some attacking possession but Irish defensive work eventually forced ball loose and they were able to clear.

Nadolo was back on the ball after Wiese’s carry through midfield, but spilled possession as Irish clawed their way back, only for Matt Scott to win a penalty on the floor as they tried to break out again.

Scrum pressure on the Irish five-metre line had No8 Albert Tuisue momentarily in trouble before support arrived and Nick Phipps was able to clear.

When Irish tried to build possession midway inside their own half again, Matt Scott picked off the pass and was able to run in to score. Burns could not add the extras this time but Tigers were in front for the first time at 12-5 on 21 minutes.

Burns nearly repeated Scott’s interception but Arundell was able to break with support left and right, only for the final pass outside to escape Hassell-Collins in a big let-off for Tigers.

Referee Karl Dickson marched Tigers back an extra 10 and a penalty award just on halfway and Jackson pushed play to the right-hand corner. Tigers worked hard in defence to win a turnover, though play came back for an offside penalty at close range and this time Jackson pointed to the posts.

Wiese’s charge upfield was halted by a combined hit from Tuisue and Curtis Rona, and referee Dickson called the TMO into action before showing a red card to centre Rona.

Tigers played the resulting penalty to the corner but lost lineout ball and Irish kicked up to halfway.

They were quickly back on their own line, though, as Montoya carried strongly and then Tigers played to the left where Nadolo attracted the defenders and offloaded for Potter in support to score. Burns added the conversion kick from wide on the left to make it 19-10.

Jackson added a three-pointer almost from the restart but Tigers were quickly on the attack again when Burns jabbed a kick to the left corner and Nadolo wrapped up wing Lucio Cinto as he gathered a metre out and took him over the tryline.

The five-metre scrum brought a penalty in Tigers’ favour and this time, with backs joining the forwards in the drive to the line, referee Dickson ran under the posts to award a penalty try as Tigers stretched the lead to 26-13 just short of half-time.

Jackson closed the half with another penalty, and the visitors opened the second half just as they had in the first, with a try.

It came from a break by Hassell-Collins down the left, with Arundell making the final run-in. Jackson was unable to add the extras with the score at 26-21.

The 13 men were on the attack again with a penalty into the corner but this time, as they set up the drive, Liebenberg emerged with the ball and Tigers could clear.

Scott made way for Matias Moroni on 47 minutes and he was soon into the action, winning a penalty and then carrying on the left as Tigers built steadily.

With a penalty advantage, Burns pushed a kick through near the posts and Reffell read it perfectly to win the race to dot down and the conversion made it 33-21.

Try number six followed with Moroni’s cleever play and pass releasing Nadolo who provided the finish and when Burns added the conversion the lead reached 19 points at 40-21.

Irish, who had been on the defensive for a while, looked sharp in attack once more around the hour mark but replacement Chris Ashton read Jackson’s final pass out wide and was able to block its path to Hassell-Collins on the touchline.

The visitors kept playing for numerous phases before a whistle in the Tigers’ favour well inside their own 22, though Bryce Hegarty when had to show precise judgement in claming a kick almost back on his own tryline.

Jackson over-struck a penalty down the right as the ball went out in-goal, allowing Tigers to gain territory which eventually brought another whistle from Dickson.

Burns turned down the kick at goal to go to the right-hand corner and they kept it close with the clock ticking into the last 10 minutes until finally a long pass to the left found Ashton and he picked his way to the line for a first Tigers score.

After Burns added the conversion, Irish grabbed their third try of the afternoon from a lineout drive in the left corner, replacement hooker Matt Cornish the scorer until a pile of bodies and Jackson kicked the conversion to make it 47-28.

Olly Robinson won turnover ball in the Irish 22 but when Tigers were blocked out, Nadolo was sin-binned with just two minutes remaining after a deliberate knock-on inside the opposition half, but there was no further scoring.

Nadolo 2, Scott, Potter, Reffell and Ashton plus a penalty try for Tigers in front of crowd of 19,000. Thank you.

Tigers will play out the final minutes a man short after Nadolo yellow card for deliberate knock-on inside the Irish half.

Hooker Matt Cornish dots down from a lineout in the corner and Irish have a third try. 47-26.

Burns converts the try and Tigers lead 47-21 in the last 10mins.

Chris Ashton has his first Tigers try, getting on the end of a long pass to the left touchline and finding his way to the line. Score is 45-21 on 71mins.

Burns conversion is spot-on after the Nadolo try, makes it 40-21 on 57mins.

Try No6 for Tigers, No2 for Nemani Nadolo, through on the left after a superb pass from Moroni. Great reception for the big man too.

Tommy Reffell gets on to a Burns grubber kick and dots down for try No5.

A quick break from Irish in the first minute of the second half and Arundell is in to score. Jackson misses the conversion. Tigers lead 26-21.

Jackson penalty closes the half...

Big heave into the corner and Tigers have a penalty try. And a bonus point. 26-13 on 39mins

Harry Potter latches on to Nadolo's break and offload on the left to dive in and score. 17-10 on 31min

Curtis Rona is sent off for a high tackle on Wiese as the Tigers No8 charged upfield.

Burns has the conversion attempt from the left touchline, but it is just wide. Tigers lead 12-5 on 21mins.

Matt Scott intercepts on the left touchline and is clear to score. Tigers lead.

Another threatening run by Nadolo but Irish get back to claw back possession until Matt Scott wins a penalty at the breakdown near halfway.

Burns adds the conversion to level the scores at 7-7 with just 8min gone.

Nemani Nadolo breaks through the defensive line and dives under the posts. 5-7.

Jackson adds the Irish conversion for a 7-0 lead with 3min gone.

First attack and Irish are in, Creevy's offload giving van Rensberg the chance to push over near the posts.

We are ready for kick-off, with Freddie Burns taking the kick. Tigers playing towards the Mattioli Woods Stand end.

There are no changes to the team announced on Friday.

London Irish arrive in Leicester this afternoon with just one league defeat in 2022 – at Gloucester in February – and as the Gallagher Premiership’s top tryscorers including 11 from their Argentina international hooker Agustin Creevy.

The Exiles go into the weekend in fifth place in the table, just a point behind Exeter Chiefs and five behind third-placed Harlequins.

Tigers won the season’s first meeting, in Round 3, with tries from Hanro Liebenberg and Nic Dolly on a first-ever trip to the new Brentford Community Stadium.

“Irish are a really good team,” says Tigers wing Harry Potter. “The last time they played us was a really close game and it’s a long time ago now. They’ve got even better and they’ve had some pretty impressive victories recently.”

Tigers won four in a row before defeat at Saracens last Saturday, only their third league defeat of the season.

Liebenberg will lead out Tigers as Ellis Genge is among five players with England, and there are starting places for Jasper Wiese and Joe Heyes. Freddie Burns makes his 200th Premiership appearance.

Referee is Karl Dickson in his 58th Premiership match in charge.

London Irish arrive in Leicester this afternoon with just one league defeat in 2022 – at Gloucester in February – and as the Gallagher Premiership’s top tryscorers including 11 from their Argentina international hooker Agustin Creevy.

The Exiles go into the weekend in fifth place in the table, just a point behind Exeter Chiefs and five behind third-placed Harlequins.

Tigers won the season’s first meeting, in Round 3, with tries from Hanro Liebenberg and Nic Dolly on a first-ever trip to the new Brentford Community Stadium.

“Irish are a really good team,” says Tigers wing Harry Potter. “The last time they played us was a really close game and it’s a long time ago now. They’ve got even better and they’ve had some pretty impressive victories recently.”

Tigers won four in a row before defeat at Saracens last Saturday, only their third league defeat of the season.

Liebenberg will lead out Tigers as Ellis Genge is among five players with England, and there are starting places for Jasper Wiese and Joe Heyes. Freddie Burns makes his 200th Premiership appearance.

Referee is Karl Dickson in his 58th Premiership match in charge.

We’re LIVE as Leicester Tigers host London Irish in Round 20 of the Gallagher Premiership season at Mattioli Woods Welford Road this afternoon. Kick-off is at 3.00pm. 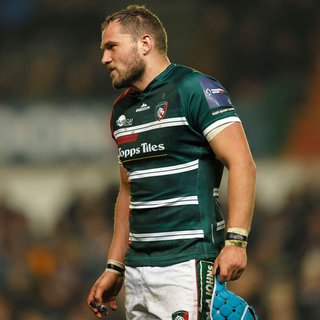 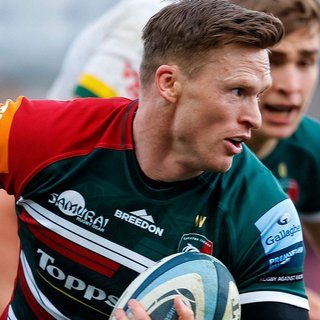